Search
Our Christmas Party/Honor Veterans was a huge success.    thank you all for bringing gifts and non-perishables and the food - the food was tremendous.   We accomplished our two objectives, i.e.  to honor our Veterans and to help local veterans and this year it was  the Keystone Military Families .  They received many toys and  food and clothing as well as the Patriots gave a $500 check to help their cause. 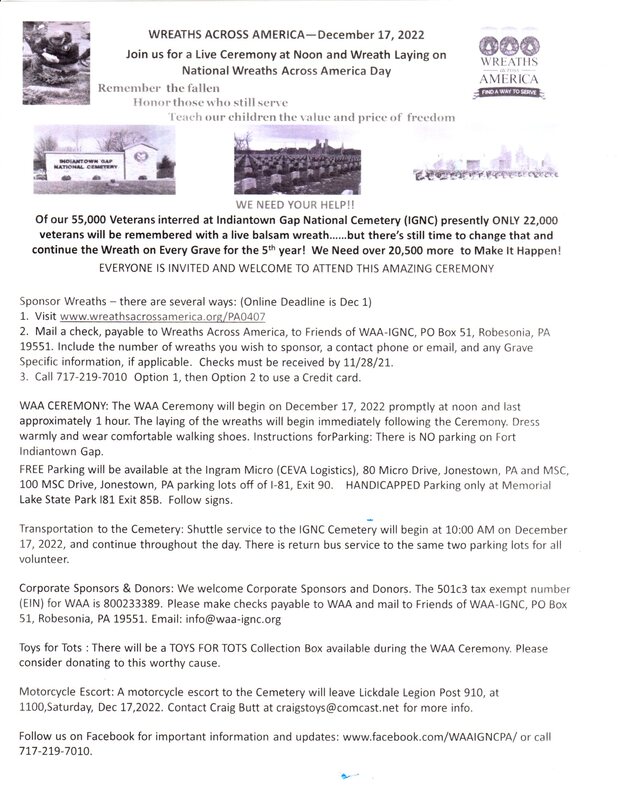 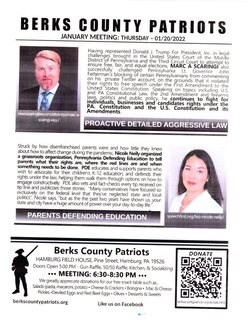 Our Meeting is January 19, 2023
​
These are Chairman Sam Brancadora's partial remarks of the November 8 Election for those of you that were unable to attend Thursday November 17th General Meeting.

I want to talk about the elephant in the room,  YES THE ELECTION.   I'm not going to sugar coat this.   This was devastating, particularly when you consider the gains that we expected.   There’s going to be much said about this but for now let’s step back and analyze  WHAT happened,  WHY did it happen,   LEARN from it and move forward WISELY.    More on this by others.

I want to thank all of you that worked your butts off for the election and also did your part to safe guard our votes.    Many of you went over and beyond, working hundreds of hours.  That’s dedication.  Again, we sincerely thank you.

Why did the GOP underperform?   You will hear many reasons.   I will give you just three.   1. Mail in ballots.    Unless the courts become our friend, the GOP needs to come to grips that mail in ballots are going to be with us until 2025 or later.  Major discussion is needed on this.  We need to start election day with the same amount of mail in ballots as the d’s do.  The GOP should adapt the democrat’s playbook as starters except for the cheating part.  We need to do ballot harvesting and we need to get mail in ballots to the 0 and 1s on the voting list.  2. GOP establishment is not our friend.  Their goals and our goals are not the same, though they should be.   3. Redistricting hurt.    More on these later.

I want to touch base on another area.   Linda and I do poll greeting at Bern 1 2 and 3.   We've been doing this for years.   Election day we each put in about 10 hours.   I talked to a lot of people and I really got to feel the pulse.   More on this later.
For now, the GOP won all 5 races in Bern 1 and 2.  In Bern 3 we lost 3 out of 5.   What's the difference in those locations?   1 and 2 are in suburban areas Bern 3 starts leaking into the city of Reading.   The further you go into the urban areas the less likely the GOP will win.  This is nothing we don't already know.   However, for the most part the GOP throughout the Country has conceded these areas to democrats.    Big mistake.   We cannot concede anything.    We must get out of our safe comfort zone.
Folks I was with the Berks GOP when they had 2 Car Rallies October 15th and November 5th through the city of Reading.  Both times we got a great response from the people.   Many of these folks have the same values as we do BUT continue to vote Democrat.   WHY?  Because we are not involved in these areas.   Folks, we can help them and they can help us.
We must get more involved; we must expand our demographics.   We must increase our sphere of influence.    We cannot concede any areas or group of people to the liberals.   This is something BCP also needs to do more of.

The election was not what we expected.  There is much disappointment.  I had a person say to me, that's it   I'm not voting anymore, I'm done   all this hard work and we lost.   End of story!  Well, I can understand that, I sympathize with their frustration and disappointment.   I think many of us feel that to some degree.   However, that's what the liberals want.  They want us to give up.  THATS NOT HAPPENING.   Some years ago, I watched a 6-part series on the Revolutionary War.   Folks after the 5th part was over if I didn't know we won the war I certainly would have thought we lost.   Victory will be ours.

The easiest thing to do is quit.   But that's not in our blood.   We are going to fight with the same tenacity that our Founding Patriots did.   They lost many battles but they didn't give up.   They knew what they were fighting for and they knew the consequences if they didn't win.   We are the modern-day Patriots.   And we owe it to them and our future to fight for what they gave us no matter the odds.  Remember, they defeated the mightiest military in the world.   Victory will be ours.

Folks this has been a grueling year.  We all deserve some R&R so for now, let's enjoy Thanksgiving and Christmas and be ready to take on the world in January.    Let’s give praise to God that we still live in the greatest country in the world  AND  thank GOD for what he HAS given us.
More to say in January.

Sam Brancadora Chairman Berks County Patriots
Berks County Patriots is starting a new Group   - Prayer Group - This will be organized and operated by Sue Fitzpatrick.   She is looking for volunteers to pray with her.     Please contact Sue at  610-301-5105 if you are interested in participating in this Prayer Group.   We all need more prayer in our lives.  Please help.    Sue will give you details of how, where, when and what.

Check out the Article on Lawyers just posted.   Very Interesting.  Page 1            page 2
Here are the results of our survey taken January 20  2022 to determine which topics are most concerning to our members.
Almost Like They Intend To Cheat In PA - Again (click here to read the article)


​
CHECK OUT NEW LINK    1776 American Empowered
Crypto Currency - What on Earth is that?
​September Newsletter

​
​One of  Chairman Sam's daily devotions is reading from a book called Go for the Green by Jeff Hopper. Each day the message is somewhat phrased in golf terms. I read this the other day and thought it was very appropriate to pass along. "For Satan himself transforms himself into an angel of light." - 2 Corinthians 11:14. Funny as it seems, resort courses look as lovely as they do because they dress up their trouble. The edges of the bunkers are tidily kept, the sand is immaculately raked, and the water is graced by dancing fountains.

​This beautiful ugliness is so like the work of our enemy, it is almost eerie. For Satan himself, the one who has for ages contended with God, could not tempt us with gross attractions. A master of disguise, he lures us into disgrace.
Anyone can recognize evil when it is sold as evil. But Satan markets little that way. Instead, he offers it to us as tolerance, freedom, or personal expression. Certainly these are noble ideas. But when we tolerate immorality, or ask for freedom to pursue our selfish endeavors, or express our feelings above the feelings of others, what is beautiful becomes a light that blinds rather than a light that illuminates."